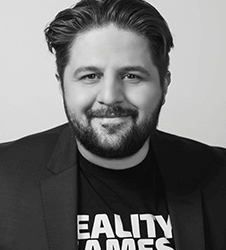 CEO, co-founder of the Reality Games

He was a founder and CEO of a marketing syndicate Supremum 360 (made up of 3 companies and employing 60 people), which he bootstrapped and ran for 12 years, and successfully sold.

He was the director of the Polish Promotion Programme 2020, which was developed at the Kosciuszko Institute in Krakow. This was a promotional programme which aims to promote Poland. One of the main objectives of the Institute was the promotion of Poland by creating new, comprehensive, and long-lasting policies. He focused on creating a comprehensive and universal strategy, common for different institutions and organisations, which will connect business with tourism and culture. Additionally, he worked on analysing Poland’s image, trying to build a distinct brand for the country.

Currently Zbigniew is the CEO and a co-founder of Reality Games, a mobile gaming studio that creates games based on Big Data. Their flagship game, Landlord Real Estate Tycoon, has over 15 mln of players worldwide, and in last 20 months company has organic growth by 10% / week in sales.

He is a creator and majority shareholder of Big Dots – the first human generated blockchain.