Brussels 29 January 2021 – an important international debate on the geopolitics of emerging and disruptive technologies was held last week. According to many experts, this topic relates to the so-called new “Sputnik moment” for the North Atlantic Treaty Organization and the need to build technological potential of the member states, including Poland. The event was organized by the Permanent Representation of Poland to NATO and the Kosciuszko Institute.

In 2020, the use of digital technologies in all aspects of the socio-economic functioning of states, institutions, and businesses has grown significantly. At the same time, the status of emerging and disruptive digital technologies as the most important piece of the geopolitical puzzle, i.e., the position of individual superpowers and countries on the international arena, has become firmly established. Digital technologies have greatly accelerated the economic development and capabilities of individual countries, but they have also become tools used for offensive purposes: from the spread of cyberweapons and strengthening intelligence capabilities, to the manipulation and interference in democratic processes, as well as successful attempts at compromising the integrity of strategic digital infrastructure of NATO member states. Among the key technologies that will present the greatest opportunities and threats to the Alliance during this decade are artificial intelligence, quantum computing, advanced data analytics and space technologies. “In order to navigate this increasingly rapidly evolving landscape of technological change and threats, the transatlantic community first needs a thorough understanding of the nature of the challenges posed by the implications of technological developments for international policy and security, in order to immediately take concrete steps that build our technological capacity,” – Izabela Albrycht, President of the Kosciuszko Institute and, since July 2019, Poland’s representative in the NATO Advisory Group on New and Disruptive Technologies, said during the meeting. Marcin Ociepa, Secretary of State at the Ministry of National Defense noted that “we are in the middle of the new era of fundamental technological change. We witness the rapid and intense technological race that will have a major effect on NATO business. […] We need to understand the threats and opportunities that stem from technological development and have an impact on the military forces, and we need to have a common understanding of these challenges within the NATO”. Minister Ociepa mentioned cooperation of allies on both sides of the Atlantic,learning from each other and sharing of good practices as key to tackle those threats.

Poland’s Ambassador to NATO Tomasz Szatkowski explained that in response to these challenges, a number of steps have been taken within NATO that have a significant impact on the functioning of the Alliance. At the 2019 London Summit, the importance of new and disruptive technologies for NATO and the Allies was highlighted, both in terms of the need to adapt and maintain technological superiority and to take advantage of new opportunities associated with them. It also established the NATO Innovation Council and the Emerging and Disruptive Technologies Advisory Group to support the Alliance’s technological development.

Furthermore, seven technological areas most relevant to NATO were identified, including artificial intelligence, autonomous, quantum, space or hypersonic technologies, but also data and advanced data analytics. A strategy for implementing new and disruptive technologies is planned to be adopted at the NATO Ministerial Meeting in February this year.

Ambassador Szatkowski noted that from Poland’s point of view an important area in the context of new technologies is defense and deterrence, therefore the Permanent Representation of Poland to NATO initiated a debate on this issue with the participation of representatives of the allied countries already last year.

The activities of NATO, in which it is expected that all member countries will actively participate, are aimed at preparing the Alliance for – as NATO Deputy Secretary General Mircea Geoană put it during CYBERSEC Forum 2020 – a new “Sputnik moment”. This time, however, the competition for NATO does not come only from Russia, but also from China. For this reason, it is crucial that the Alliance and its partners (including Australia, Japan and South Korea) understand and share a common position on the new technological challenges.

During the meeting, Assistant Secretary General for New Security Challenges David van Weel presented how the Alliance must adapt to these changes.  He indicated that it is necessary to change the culture of innovation. “We need to build effective collaboration with academia and the private sector, including those outside the defense sector, as well as with start-ups. An ecosystem needs to be created in which breakthrough innovations can be made at the pace that dynamic technological development forces, rather than at a pace constrained by long procedures”.

The Kosciuszko Institute’s report “Geopolitics of Emerging and Disruptive Technologies“ published in October 2020 perfectly shows all mechanisms of using advanced data analytics, artificial intelligence, cloud computing, 5G technology, and in the future also quantum computing in building military, political and economic power of countries, defence alliances and international organizations. The event included the presentation of key assumptions and conclusions of the report, as well as a discussion of the most important geopolitical aspects related to the development of technology. Participants included permanent representatives of NATO member states representatives of defense and foreign ministries, as well as renowned experts.

Link to the report: https://ik.org.pl/en/publications/report-geopolitics-of-emerging-and-disruptive-technologies/ 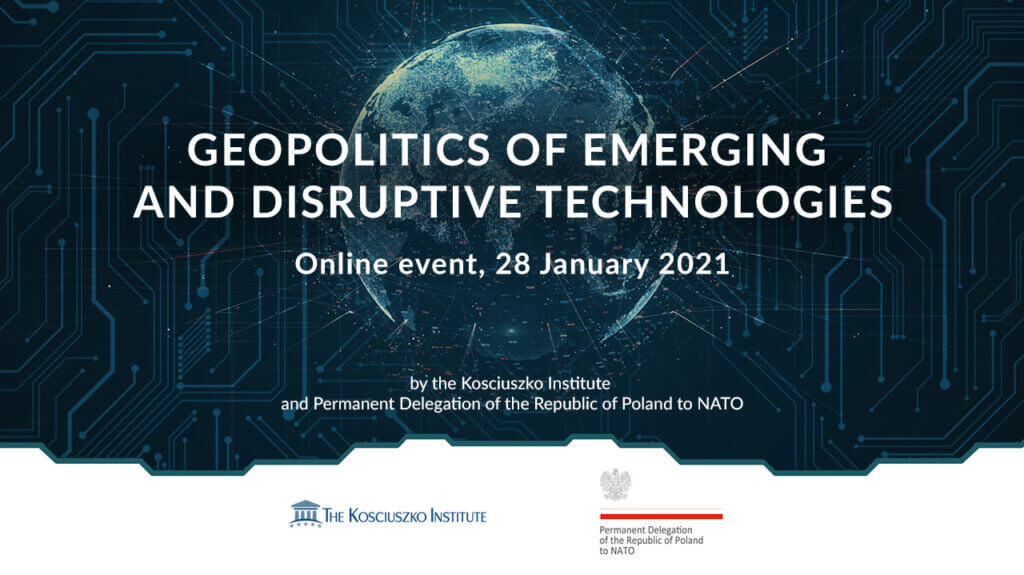