As part of its 20th-anniversary celebration, the Kosciuszko Institute is excited to announce its new project: the General Talks podcast series. This initiative was born from the desire of our team to expand the Institute’s channels of communication and sharing of ideas and information on the most prominent subjects around security.

For 20 years, the Institute has embraced its mission of addressing complex challenges of international security that have emerged from geopolitical tensions and new hybrid threats. Through publications, sharing of news, conferences, and other projects, we have made impactful and lasting contributions to both public and private sectors, and raised awareness to the civil population.

Now, by engaging in this new platform of communication, the Kosciuszko Institute hopes to get closer to you, promoting insightful discussions that will keep you updated and informed from anywhere and at any time. All you have to do is puggle your headphones and join us on Spotify!

The General Talks podcast series will have the format of interviews with the Institute’s analysts and experts in the field of cybersecurity and hybrid threats such as disinformation. In a more informal and relaxed manner, we hope to share information, data, ideas, and foresight on the most prominent security challenges and threats of the next decade.

And you don’t have to wait any longer because new episode is already up! 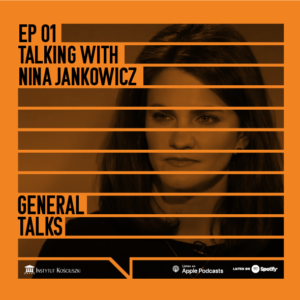 In the first episode, Michał Krawczyk, one of our Disinfo analysts, talks with Nina Jankowicz, The Wilson Centre disinformation expert and author of “How to Lose the Information War: Russia, Fake News, and the Future of Conflict’’.

With an interesting and engaging approach, she has introduced what information warfare is and how it works, as well as its role at the international and national levels. Throughout the interview, Nina has also reflected on how world powers are using disinformation activities and techniques (such as Russian’s impact on Estonia, Poland, and Ukraine) and the defence systems against disinformation. 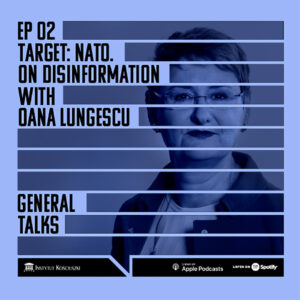 In the second episode, we discussed NATO’s approach and experience in combating disinformation and malign information operations with Oana Lungescu, who is the organization’s spokesperson.

NATO has demonstrated that it treats the problem of disinformation with the utmost seriousness by presenting a series of initiatives to combat propaganda and disinformation.

We believe that by showing such good examples, exposing threats and hostile actions, and debating the problem we can raise awareness and make our contribution to ordinary citizens’ knowledge about the problem.

In the third episode of General Talks, we hosted Michael Weiss – a journalist and researcher focusing on Russian disinformation and propaganda activities.

In the episode, we discussed the latest publication of our guest “Aquarium Leaks: Inside the GRU’s Psychological Warfare Program”, which is based on important GRU documents and shows Russia’s strategies and motivations in its actions.

We also raised the issue of protection against disinformation and propaganda activities. Michael Weiss also talked about how he became a target of Russian intelligence attacks when he reported on the intervention in Syria.

Put your headphones on and join the Kosciuszko Institute in exciting and productive discussions!

Stay updated on the release of new episodes by checking our social media. Find us: