In September 2017, Tim Prior defended in a policy brief for CSS (ETH Zurich) that NATO needed to look outside of the military spectrum to achieve a higher degree of resilience. Prior’s vision is nowadays shared by many actors that advocate for a deeper involvement of the civil society in the revision of the Alliance strategic vision. 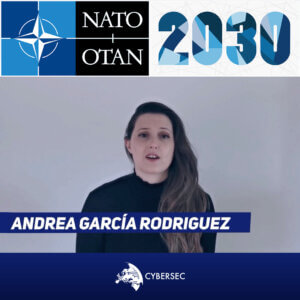 As such, in summer 2020 NATO’s Secretary General, Jens Stoltenberg, announced the creation of a novel advisory group that would participate in the NATO 2030 process. The fourteen members of the NATO 2030 Young Leaders group, to which I proudly belong to, have been selected from high-level award schemes of partner institutions—CYBERSEC, of which I was awarded 2019 Young Leader, being one of them.

The goal of the group is simple— as compared to similar advisory groups — give new ideas on what should NATO look like in 2030 and give recommendations on how to achieve this objective.

Never in the history of a military alliance youth groups have had a role. Besides the novelty itself, NATO’s efforts are remarkable for two reasons. The first reason is the issue of values. We, the new generation, have been born in times of peace and of democracy. We have enjoyed security since we were born and that is also why, we, are increasingly weary of military alliances. Also, the youth embodies a indigenous and global democratic culture, one that has been taught to us since the first days of school and favoured by globalisation. Most of us already had a computer at home when we were born. That is one of the reasons young people should be part of the process—we, the young people, need to feel NATO like ours.

Secondly, by including young people into the strategic-making process, NATO has shown its ability to think out-of-the-box. While academic and private sector debates are clearly of utmost importance, the newest generations are more sensitive to some of the problems that will become strategic challenges for the Alliance. Take, for instance, climate change and the global movement #FridaysForFuture. Or the impact of disruptive technologies in the everyday lives of young people. Teenage suicidal rates are on a peak partially because of the impact of social media. The NATO 2030 Young Leaders group will bring these lessons to the table, but also ideas that would be unthinkable to senior groups due to their trajectory and viability-assessments. However promising, there is always a risk, and I would like to highlight two.

As shown in the NATO 2030 Young Leaders Summit celebrated on November 9th, 2020, the NATO 2030 Young Leaders group should not become an instrument of public diplomacy. The efforts of the Alliance of presenting the group to the NATO audience must be recognised. Many heads of state and government showed their support by asking question to selected members— I, myself, had to reply to Mme. President of Estonia—, and then the floor was divided into several rooms hosting different discussions. The groups offered very interesting discussions and top-notch participants like Mr. Pompeo, US Secretary of State. However, none of the 14 Young Leaders spoke at the panels.

NATO should also try its best to make sure that the group participates in equal terms in the NATO 2030 process and to seriously consider the group’s recommendations. The enthusiasm of youth groups is not comparable to the first-hand experience of officials. Nor the ability to think out-of-the-box of youth groups is comparable to the insights of practitioners. However, these are indispensable elements of the recipe.